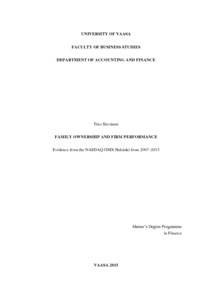 The purpose of this thesis is to find if family ownership in companies has an effect onfirm performance in Finnish NASDAQ OMX Helsinki stock exchange listed companiesduring 2007 to 2013. Furthermore, the thesis studies if family ownership leads to better performance than other ownership structures. The topic is current because academicempirical research has focused on the topic only for the past decade and mainly duringbooming years.

Family ownership is one of the most common ownership structures in the world andthey have common specific features. The families try to retain the control of the company, they are usually risk averse and the family companies usually have on average longer investment horizons than other companies. Families usually have most of their wealth invested in the company and see their company more as a heritage to their descendants and therefore are not so interested in short-term firm performance.

Because of the specific features of family firms, the effect of family ownership on firm performance can be studied with the help of agency theory. Can the firms lower the agency costs by acting both as the owner and the management? Furthermore, do the conflict of interest and the costs of families striving for private benefits stay at a reasonable level and thus not harming the firm performance?

By utilizing hand collected panel data from Finnish listed firms during 2007–2013 and random effects GLS regression, this research shows evidence that listed family owned firms do outperform other firms when measuring performance with accounting performance ratio ROA and when observing against other listed firms in general. Unlike in previous international studies, no evidence for so-called founder effect could be found from listed Finnish family firms. Furthermore, when identifying other controlling shareholder blocks, no evidence of outperformance by family firms could be found.