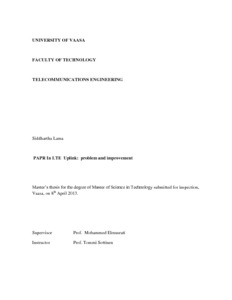 LTE-Advanced is one of the most competing and widely adopted families of standards that will meet the 4G broadband wireless mobile communications requirements recommended by the IMT-Advanced for the terrestrial radio interface specifications. Pre-commercial deployments have proved that LTE-Advanced will ensure the competitiveness of the 4G mobile networks by providing a high-data-rate , low latency and optimized system.

Unlike the IEEE802.16m WiMAX which uses OFDMA in both downlink and uplink multiple access schemes, LTE and its advanced version systems continue to use different multiple access transmissions in which OFDMA and SC-FDMA are supported in the downlink and the uplink, respectively. The idea to use OFDMA in the LTE uplink communications invoked discord among the members of the 3GPP standardization body because of the growing concern over the signal peakiness which degrades the efficiency of mobile station power battery consumption. The dire consequence of the peak amplitudes generated by the superposition of several subcarriers of identical phases led 3GPP to adopt SC-FDMA as an uplink multiple access method.

Thus in this paper , the effect of pulse shaping on the performance of the uplink PAPR of distributed FDMA and localized FDMA will be dealt deeply. The performance improvement will be done by varying the roll-off factor of the raised-cosine filter for pulse shaping after IFFT.