The effect of level of trust, communication and difference in conflict management style on the perceived level of conflict between managers and employees in commercial banks in Nepal. 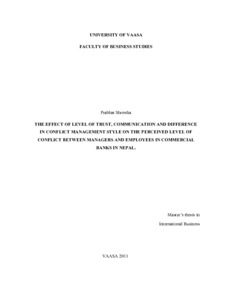 This research develops and tests hypotheses on the relationship between the perceived level of conflict (dependent variable) with the level of communication, level of trust and difference in conflict management styles (Independent variables) between employees and managers in commercial bank in Nepal. The research uses three lenses to examine the connection from manager-manager, manager-employees and employees-employees perspectives. The survey questionnaire is used as tool to collect the data. There were 105 respondents from five commercial banks in Nepal.

The findings from data show that employees and managers working in commercial bank in Nepal reported remarkably little conflict. They are satisfied with the level of trust and communication in the workplace. The data also suggests that they have experienced unusually less dissatisfaction in handling the conflict between them. There were three control variables; age of the respondents, length of their employment and gender to study the variation in response. Of these, the length of employment had a strong connection to perceived level of conflict making them negatively correlated.

The finding was also discussed with two managers and five employees via telephone interviews. In the interviews, they emphasized that result from the data cannot either be totally accepted and can neither be completely denied. The variance between finding and the truth can be because the survey was conducted with residents of collectivistic society, who are less likely to talk about their dissatisfaction among and in conflict related issues.