Social Capital of Political Leaders: The Third Dimension of Political Power, Committee of Foreign Affairs in Parliament of Finland 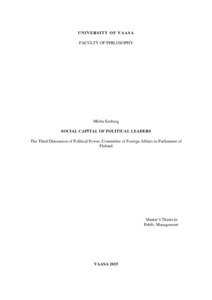 Recently, theories on social capital have received growing attention in public policy making due to the benefits social capital is claimed to aggregate to goups of people. Emerged critics, however, challenge this comprehension: social capital also restricts performance. According to Pierre Bourdieu (1930–2002), social capital is a metaphor for power that defines individuals’ positions in social hierarchies. Forms of this influential power are relational to different fields, within which social interactions are embedded. Further, distribution of social authority is a growing trend in political leadership—who decides what is decided?

Drawing on Bourdieu, this thesis defends the third dimension of power, as introduced by Steven Lukes (2005), as the dominant component of social capital. The purpose is to extend past social capital research to parliamentary context in order to explain differences in political leaders’ performance. In particular, the study sets forth political leaders’ resources for power and deepens understanding on the social regularities, power distribution, and unwritten rules in the Parliament of Finland. The qualitative case research samples 15 political leaders working in the Committee of Foreign Affairs at the time the research data was gathered in year 2015. Method for the study is qualitative case research. Primary data was gathered via semi-structured interviews, the average duration of which were 60 minutes.

Findings reveal that social relationships contribute to dominate social positions that equal with political power. Power is distributed proportionally to quality and amount of individual resources with ability to advertise them, hence, Members of Parliament (MPs) are pre-evaluated based on age and gender. MPs with shared interests tend to form reciprocal sub-groups which strengthen their influence. First term MPs are positioned low in the power hierarchy. The most valued resources for power are status, substance, seniority and experience, social capabilities, and charm including persuasion skills. Social sensitivity together with parliamentary regularities constitutes political habitus, or the eye for the game. Power relations shape individual identity and judgement, which have considerable effect on MPs’ ability to utilize available strategies for political influence as well as on the collective benefits of social capital. In this case, power distances are narrow and micro level social capital is converted from the cultural. Therefore, social capital induces positive gain in form of consent and knowledge based political decisions. However, actors diverging from shared expectancies are excluded in the political decision making.

This thesis paves the way for socio-political research on social capital, parliamentary policy making, and organizational leadership by introducing a theoretical frame that conjoins the third dimension of power and Bourdieu’s social capital.