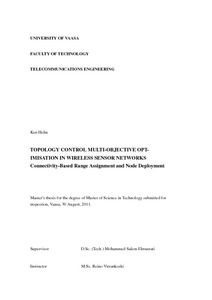 The distinguishing characteristic that sets topology control apart from other methods, whose motivation is to achieve effects of energy minimisation and an increased network capacity, is its network-wide perspective. In other words, local choices made at the node-level always have the goal in mind of achieving a certain global, network-wide property, while not excluding the possibility for consideration of more localised factors. As such, our approach is marked by being a centralised computation of the available location-based data and its reduction to a set of non-homogeneous transmitting range assignments, which elicit a certain network-wide property constituted as a whole, namely, strong connectedness and/or biconnectedness.

As a means to effect, we propose a variety of GA which by design is multi-morphic, where dependent upon model parameters that can be dynamically set by the user, the algorithm, acting accordingly upon either single or multiple objective functions in response. In either case, leveraging the unique faculty of GAs for finding multiple optimal solutions in a single pass. Wherefore it is up to the designer to select the singular solution which best meets requirements.

By means of simulation, we endeavour to establish its relative performance against an optimisation typifying a standard topology control technique in the literature in terms of the proportion of time the network exhibited the property of strong connectedness.

As to which, an analysis of the results indicates that such is highly sensitive to factors of: the effective maximum transmitting range, node density, and mobility scenario under observation. We derive an estimate of the optimal constitution thereof taking into account the specific conditions within the domain of application in that of a WSN, thereby concluding that only GA optimising for the biconnected components in a network achieves the stated objective of a sustained connected status throughout the duration.