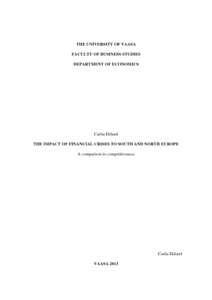 Parliamentary elections and polls have shown that across Europe, voters are increasingly worried on the financial and sovereign crises and on the burden created to the lender countries in the Eurozone. Research on these crises has focused on the management of sovereign debts and on the banking crises (e.g. Frangakis 2011 & World Economic Forum 2005&2010, IMF 2008). This study compares the South (Portugal, Spain, Greece and Italy) with North Europe (Norway, Denmark, Finland and Sweden). One measures the relative performance in terms of GDP growth and competitiveness of the regions.
Our analysis shows that private and public social expenditures in South have gone up by 3 percent point during 1990 – 2003. Thus, the fiscal policy has supported the countries to grow by the Keynesian multiplier. At the same time, the differences in government debt and private voluntary social expenditure between the North and the South have continued to grow during the financial crises. Therefore, the comparison of the regions needs a diverse tool taking into account both different aspects of welfare and productivity.
The comparison of competitiveness of the countries as indicated by the IMF and WEF competitiveness reports show support to the Nordic countries. Additionally, the empirical analysis shows that the main reason for slow growth in the South is the public debt and not any cultural factor or environment.
Final part of thesis uses performance indices in explaining GDP growth. I rely on the Global Competitiveness Index of WEF with 115 countries from 2004–2005 to 2009–2010. According to the results, the Global Competitiveness Index predicts growth when controlling for capital formation, savings rate and government debt. The South might have some omitted competitiveness not viewable in the competitiveness index.