﻿Accountability without hierarchy: How to engage and commit employees to decisions without enforcing authority. 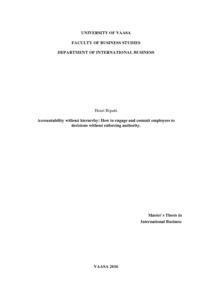 Traditionally hierarchy and structure has determinate how organization create and implement decisions, but because of the modern business environment organizations have to adopt to more flexible and agile way of working, often by flattening the hierarchy. Since lack of structure leads often to decreasing accountability, commitment and engagement, this thesis focus on how these attributes can be harnessed in this new environment. This is observed by a retrospective analysis data of a start-up organization’s behavior, which they have recorded digitally on their own platform.

The measured attributes: engagement and commitment are regarded by research highly important in different phases of decision-making from designing a decision to implementing it. Problem with studying it retrospectively is that individuals have a bias on remembering their own logic and behavior. This quantitative study focus on analyzing records of this behavior rather than memories of it to eliminate this bias.

Statistical correlative analysis of these data records indicate that there is negative correlation with being accountable to oneself and committing in doing one’s own actions, more precisely individuals were more committed to action when they were accountable for someone else. Also the statistic shows that individuals who were in active role in a decision were more committed to it. Thirdly the relationship of general engagement and activity in a decision and its effect on individuals’ commitment was analyzed, this showed some correlation, but because of the small sample size and spread of data, this result can’t be accepted as scientific significant.