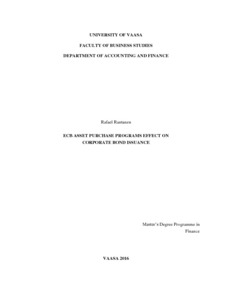 The purpose of this thesis is to study the effect of European Central Bank asset purchase programs to corporate bond issuance in European countries. Thesis distinguishes between two main transmission channels of quantitative easing to corporate bond issuance by examining both the debt holdings and purchases effect during the ECB quantitative easing.

Thesis employs a panel dataset of 15 499 bond issues from 19 European countries between years 2000 and 2015 with a series of explanatory variables controlling for changes in the macroeconomic environment and lending behavior. Countries are grouped to developed and frontier markets of the European Union to control for different characteristics in the level of integration to the European financial markets. Additional tests include various econometric techniques and tests for changes in the qualitative factors over the time period.

Results suggest a significant positive relationship between the ECB debt holdings and the corporate bond issuance, i.e. stock effect, which is particularly strong in the developed economies of Europe. This provides further evidence on the existence of portfolio rebalancing where the investors are crowded out from assets that are targeted by the QE. Flow effects of the ECB purchases do not appear to have a significant impact on bond issuance in the European markets. Robustness tests indicate a strong influence from the foreign central banks and that the decrease in credit supply has increased corporate bond issuance after the financial crisis. Additionally, during the QE programs, the average credit rating has decreased indicating that companies with lower credit quality issue more debt during times of excess liquidity. These results provide information to the policy makers on the early impact of the ECB quantitative easing and a basis for analysis on the corporate lending behavior during unconventional monetary policies.