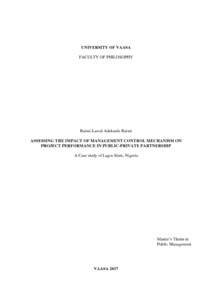 The purpose of this study was to assess the impact that management control mechanism has on project performance in projects that were implemented using Public-Private Partnerships arrangements in Lagos State, from 2000 - 2016.

Quantitative research method was adopted, and a cross-sectional survey was conducted in public and private sector organizations in Lagos to collect the research data. A total of 120 questionnaires were given out and 89 respondents returned their questionnaire within the given time of data collection.

Research data for the study was gathered from ten public institutions under Lagos State Civil service, eleven private construction companies in Lagos, two stakeholders who are members of The Nigerian Society of Engineers (Lagos Chapter) and one respondent who works with a research institute in Lagos.

Empirical data gathered from the study indicate that the use of management control mechanism is positively correlated to project performance of projects implemented under Public-Private Partnerships arrangements in Lagos State. Findings further substantiate that private sector participants possess a number of management skills and expertise, and these has the capability to ensure effective implementation of projects. In-addition, empirical data affirms the importance of the private sector as a reliable actor in the provision of public infrastructure.

The study attributes the success of the private sector to the doctrines of new public management. This is because, attributes of new public management namely, lesser bureaucracy and hierarchy, accountability, transparency, emphasis on output control, emphasis on employee and project performance to mention a few, were seen as the propelling force of the private sector.