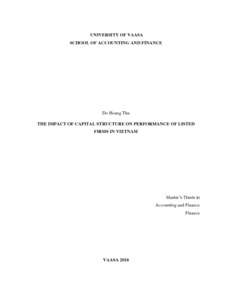 This paper analyzes the impact of financial leverage on performance of listed firms in Vietnam, where ROA, ROE and Tobin’s Q are used as proxies for firm performance. Different empirical models are applied to test the relationship between capital structure and performance of non-financial firms and banks separately. In addition, this study also takes the 2008 global financial crisis into consideration when conducting empirical regressions.

Financial data of Vietnamese non-financial listed firms during the period from 2008 to 2016 is mainly employed from the database Bureau Van Dijk’s ORBIS, data for bank-specific variables in the same period is extracted from official annual reports of listed banks in Vietnam. Moreover, The World Bank’s database is used to collect data for Vietnamese GDP and inflation rate, which represent for macroeconomic variables.

Empirical results from panel Ordinary Least Squares (OLS) regressions reveal a negative relationship between financial leverage and performance of Vietnamese non-financial firms. Regarding banks, financial leverage has a negative impact on bank’s ROA but positively affects bank’s ROE. These outcomes remain unchanged when the 2008 financial crisis is taken into account.

To solve the endogeneity problem, this paper uses the two-step system generalized method of moments (GMM) estimator. The negative effect of capital structure on performance of non-financial firms in Vietnam is confirmed. However, results for listed banks become insignificant.