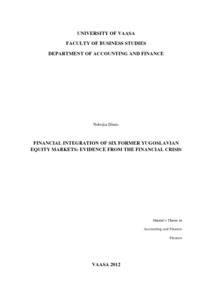 The empirical findings indicate that Croatia and Slovenia represent markets with considerable financial integration towards developed markets of US and Germany. Serbia, Bosnia, Montenegro and Macedonia only showed the short-run cointegration with mature markets during the financial crisis period. The financial integration among the former Yugoslavian countries increased during the financial crisis. Croatia represents a dominant market in the region of former Yugoslavia affecting the returns of every other market in the region significantly. The role of Serbian market in the region increased during the financial crisis period. Due to the level of financial integration, superior portfolio returns for international investors are rather limited in case of Croatia and Slovenia as these markets’ returns are in the long-run equilibrium with mature markets. However, diversification benefits can be pursued by investing in other former Yugoslavian countries.