Media Representations of the Egyptian Military Overturn: A Multimodal Analysis of Online News Articles of the New York Times and the Hindustan Times 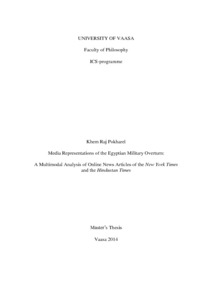 The military overturn which happened on 3rd July, 2013 in Egypt astonished the democratic nations because Egypt had lost the officially elected president Mohammed Morsi from the Islamic Brotherhood Party. Many international and national media gave live casts of the events with the help of their agencies and sources. On 14th August, there was a huge massacre. Many supporters of Morsi (mostly Islamists), neutral civilians, security personae and foreigners were killed, wounded and hospitalized. Online media represented the Egyptian events with the usage of multiple modes: visual and verbal.

This study explores the online news articles of the New York Times and the Hindustan Times on the Egyptian events during the period of 15th to 19th August, 2013. Adopting a multimodal discourse analysis approach, as developed in the tradition of systemic functional grammar, the study analyzes how social actors are represented in the news articles. This analysis is based on both visual and verbal representations and shows the probable relationships among visual and verbal representations of social actors and the readers.