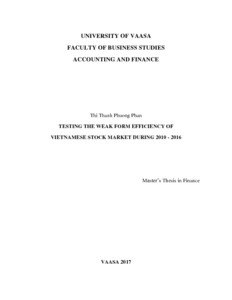 After the financial crisis considerably affected the economy of developed countries, investors started to pay attention towards fast developing emerging markets.
The study focuses on examining the presence of the weak-form efficiency for the Vietnamese stock market from 2010 to 2016. Using the relationship between the Efficient Market Hypothesis and the Random Walk Theory, three approaches are applied for the test of the independence of daily stock returns of Vietnamese stock index (VNI) and 10 representative stocks listed in Ho Chi Minh stock exchange (HOSE), namely: autocorrelation tests, runs tests and variance ratio tests.
Collected data includes above stock returns from January 2010 to September 2016 and is divided into two cycles (January 2010 – January 2014 and January 2014 – September 2016). Although autocorrelation tests and runs tests show efficient sign of some stock returns in the second subsample, variance ratio tests reject the null hypothesis of random walk theory and market efficiency. As a result, the weak form efficiency of EMH does not hold for the Vietnamese stock market in the period of over more than 5 years 2010 – 2016.