The Impact of Banking Efficiency on Stock Returns 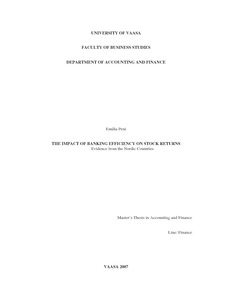 The Nordic banking sector has gone through major changes during the past two dec-ades. The most significant changes have been internalization, technological develop-ment, and changes in the legislation. The objective of this thesis is to investigate how banks’ efficiency has developed during and after the changes in the market, and whether changes efficiency figures have an impact on stock returns or not.

The data used are gathered from ten-year period including years 1996–2005, and cover-ing the Nordic countries Denmark, Finland, Norway and Sweden. Data Envelopment Analysis method is used in this study. Two efficiency figures are calculated for each bank, one measuring banking service efficiency (BSE), i.e. it measures producing bank-ing services, and the other measuring profit efficiency (PE), i.e. the ability to make profit.