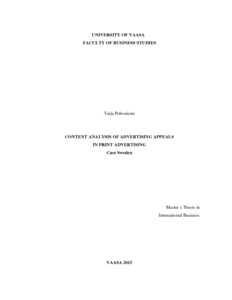 Marieke de Mooij (2010) finds in her research of advertising appeals based on Hofstede´s 5 D Model of national culture that in a feminine country soft-sell appeals would be more common in advertising than hard-sell appeals. De Mooij finds the use of fear appeal not to be effective in low uncertainty avoidance cultures, where people are more responsive to benefits than to threats. Instead benefit would be more effective.Sweden is a low uncertainty avoidance culture and the most feminine country in the world. In this research with a content analysis of 400 advertisements in four high circulation magazines in Sweden, was the use of soft-sell versus hard-sell and fear versus benefit appeals examined and analysed. The similarities and differences between statements of de Mooij based on Hofstede´s 5 D Model and empirical findings were analysed. The use of these appeals between magazines, product classes, product categories and between local, foreign and local multinational companies were examined.