The role of students in higher education 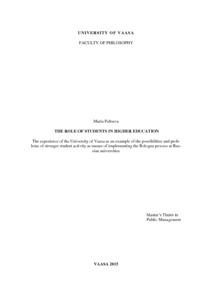 The Bologna process officially started in June 1999 when the Bologna Declaration was signed. Russia joined the Bologna process in 2003 that courses significant changes in Russian higher education. The changes have mainly happened in the structure of university degrees.

The theories - new public management, entrepreneurial theory, and entrepreneurial university theory - will be selected in order to describe the tendencies in higher education and role of students in new system. The theoretical part will be also based on the analysis of legislation and documentation concerning higher education. It will present how the ideas of the Bologna process should be implemented in Russia, but it does not include the analysis of changes that have already been done.

The method is used in the thesis is qualitative and descriptive. The several methods were used during collection and analysis of material: observation, active participation, interviews. 15 people were chosen for the interviews, the can be divided 4 focus groups: leading members of students’ organizations, stu-dents of Master’s Degree Programme in Intercultural Studies in Communication and Administration, International officers, teachers from Master’s Degree Programme in Intercultural Studies in Communica-tion and Administration( total number of interviewees is 15). The focus groups are connected by Univer-sity of Vaasa.

During our research we found out that active involvement of students activities and opportunity to influ-ence the management of the university help to develop market-demanded skills and competences, to develop sense of community and belonging to University, to obtain working experience. All that prepare student for the working life.

To conclude we can say that in order to implement the Bologna process fully in Russia, the students should be involved in management of University more actively.