Are foreign exchange rates only affected by U.S. and domestic news? 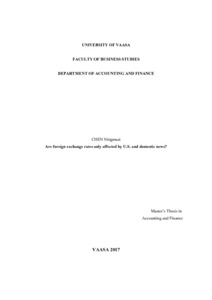 The purpose of this paper is to determine whether foreign exchange rates are affected by macroeconomic announcements from economies other than Unites States and homelands. The motivation is the economical interaction increase in current globalization trend, while most previous literatures focus on the influence of domestic economic information and the international influence of Unites States on the foreign exchange market.