The Lead-Lag Relationship between Stock Index Futures and Stock Indexes. Evidence from the US Stock and Futures Markets 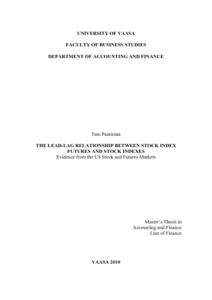 The focus of this thesis will be on the United States stock and futures markets. Two major stock indexes, Standard and Poor’s 500 and Dow Jones Industrial Average, are chosen. The corresponding futures are SP and DJ, respectively. The data will consist of 5-minute intraday returns from a sample period of 8 months running from August 2008 to March 2009. The relationship between the two markets will be studied with Granger causality theorem and Vector Error Correction model.

The results show that there exists a two-way causal relation between S&P 500 and SP and DJIA and DJ. Furthermore, from the results it is also evident, inconsistent with the majority of the previous research, that there exists strong evidence of the two indexes leading the two futures. Additionally, a strong lead of SP over S&P 500 is also detected. Weak evidence of DJ leading DJIA is found. Furthermore, the lead-lag relationship seems more unstable than previous studies have found it to be.

The contemporaneousness of the data period and the global economic recessions is presumably the most important reason behind these surprising results. It is possible that during uncertain times, the stock market seems more tempting for the investors than the derivatives market. If speculators move away from the futures market during recession, as it proves too risky, hedgers who follow the stock market more closely may settle for a price under or over the market, thus inverting the lead-lag relationship. Additionally, the insecurity of the speculators might also in part explain why the lead-lag relationship is so unstable during the recession.