Career Decision Making of Self Initiated Expatriates (SIE): Past, Present and Future Perspectives 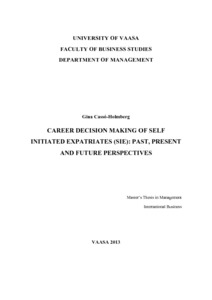 Hitherto, literature has mainly focused on the analysis of career development and choices surrounding organizational expatriates and less attention has been bestowed to the career decision making of SIE, which has been in constant growth over the last 16 years; therefore, in order to contribute to the dearth of SIE research; this study aims to determine the influential factors that have an impact on career decision making of SIE, within past, present and future contexts, by applying a role theory perspective and systems theory framework theories.

Drawing on the qualitative research design, to capture properly the factors that influence career decision making of SIE, within the past, present and future context; this paper reports the answer to six semi-structured interviews conducted and fully transcribed for further analysis.

The results show four main groups within the SIE subject to this study: Studies, dual career earner, corporate self initiated expatriate and job seeker. Depending on the group and their life stage, the influences differed, leading as prominent influential factors: the individual itself, family, organization and employment market.