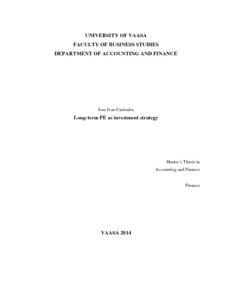 This study focuses on the US market, employing data from 500 firms trading in the S&P500 index during the period 1998-2013. Decile portfolios are formed based on the traditional PE metric and other variations. The results indicate that the addition of remote earnings in the estimation of the multiple do not increase its performance. The evidence obtained shows that only the use of earnings from the previous two years (EP2) outperforms the traditional ratio.

The examination of the PE effect is conducted adopting the 4-factor model approach. Due to the characteristics of the sample, the regression reveals that the effect generated by EP2 is controlled only by value and momentum factors but not by the size one. Moreover, the reward-risk analysis exposes that the regular PE outperform the EP2 in Sharpe ratio basis. Additionally, it is demonstrated that the January effect does not cause the PE effect.

Extensive experiments show that the performance of the multiple can be increased by reducing the holding period, and by combining it with anomalies such as size and momentum. The combination of the size and PE effects provides the best performing ratio in this study and it indicates a clear relation between size anomaly and the PE effect.