THE EFFECTS OF BANK CAPITAL ON BANK PERFORMANCE AND RISKINESS AROUND THE FINANCIAL CRISIS: Empirical Evidence in European Region during 2005-2011 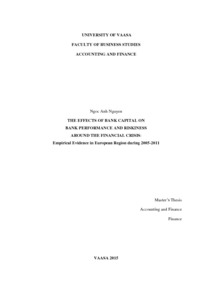 The main purpose of this paper is to examine the impacts of bank capital on bank profitability and riskiness around the period of financial crisis. The study applies fixed-effects panel regressions and uses bank-level data for 15 European countries over the period 2005-2011. The study also investigates this relationship for different bank categories (commercial, cooperative and other banks) as well as bank size (small, medium and large banks).
Overall, there is a significant and positive relationship between capital and bank profitability before and after the sub-prime crisis; however, no relationship is detected between them during financial crisis. In addition, there is strong empirical evidence that
banks with higher capital level have lower return volatility and higher financial stability, especially prior to and after the crisis. Besides, there are two important conclusions reached after considering the capital effects in different bank categories and sizes. First, bank capital has the strongest positive impact on profitability of cooperative banks, followed by commercial banks and other banks. Second, large banks have the highest effect of capital on stability and earnings risk; meanwhile the risk of small banks is least impacted by capital level.