THE EFFECT OF CONTROL OF CORRUPTION ON FINANCIAL DEVELOPMENT 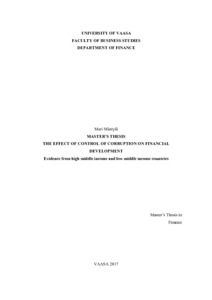 Panel data used in this study consists of 13 countries and 15-year period from 2000 to 2014. Generalized Method of Moments (GMM) is seen as a suitable method for statistical analysis since it accounts the most common problems with panel data, the problem of endogeneity of explanatory variables and the problem with country-specific fixed-effects.

More work needs to be done to find the effect of control of corruption on financial efficiency. Control variables used in this study were not appropriate ones for measuring turn-over ratio in stock markets. Also, the results of this study can be supported by using other proxies of access, depth and stability.