The Effects of Social Screening on Portfolio Performance 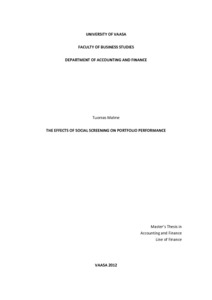 Socially responsible investing (SRI) is the fastest growing investment trend in the world and it has been extensively studied in the past decades. Most scholars have studied the phenomenon in the context of the modern portfolio theory, some have sought different approaches. However a vast majority of the studies have concentrated on professionally managed funds and indices. For this study the socially responsible portfolios are created on purely ethical grounds by disregarding all financial indicators. The practice of social screening is also inspected thoroughly in order to find out at which point the screening stringency starts to limit the performance of the investment.

The effect of social screening is studied though a set of socially responsible portfolios. The portfolios are based on a company specific ethical score which is provided by Covalence, an independent Swiss research company. The portfolios are constructed so that they reflect different levels of screening stringency. The portfolios are then subjected to performance analysis, more specifically risk and return indicators, regression analysis and risk-adjusted performance metrics. The effect of industries is also investigated. The observation period is divided into distinctive periods in terms of market cycles in order to find out whether the results differ in bull and bear markets.

The results are very much consistent with previous studies in the bull market. Although some SRI portfolios performed better than the market based on risk-adjusted metrics, none of the results were significant. However the unethical companies were able to beat the market with significance. Overall the results from period 1 support prior evidence. However there are some anomalies which occur in the midst of the financial crisis in period 2. All portfolios seem to behave differently in terms of SMB and HML –factors of the Fama-French model. None of the regression coefficient proved significant but the worst performers of period 1 seemed to be the best in period 2. The industries do not seem to have important effect, though the ones which have low ethical scores have also the lowest correlation with SRI portfolios. The results also conclusively indicate that after a certain point the level of risk rises at an accelerating rate when more screening is imposed. Nonetheless the empirical evidence indicates that SRI should not lead to a direct performance penalty, and should therefore be regarded as a viable option for any investor.