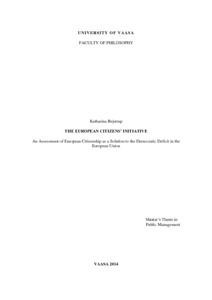 The European Union (EU) introduced the European Citizens’ Initiative (ECI) in the Lisbon Treaty as a means of strengthening citizen involvement in the European decision-making process. The ECI allows a minimum of one million EU citizens to request that the European Commission submit a legislative proposal on the issue of the initiative. The ECI is, however, not only a means of strengthening participatory democracy in the EU. It also bears the potential to democratise the EU by facilitating the emergence of a general European public sphere since it essentially encourages European citizens to debate issues of European relevance across national borders. This is relevant because it is often claimed that the EU suffers from a democratic deficit.

Previous research evaluates the ECI based on its practical implications or its contribution to participatory democracy. Instead, this paper contextualises the ECI as part of the empirical concept of European citizenship. This is based on the assumption that the democratic deficit is actually a citizenship deficit.