The Equilibrium Relationship and the Price Discovery Process of European Corporate CDS and Bond Spreads: Evidence from 2007 – 2013 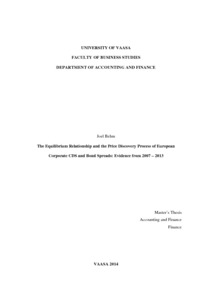 This thesis studies the dynamics of European corporate credit risk pricing over the period of 2007 – 2013. Firstly, the theoretical long-run equilibrium relationship between the two credit risk markets, the credit default swap market and the bond market, is tested. Johansen cointegration tests are used to confirm the existence of the equilibrium relationship, while entities for which the theory holds are analysed with a vector error correction model (VECM) to determine which markets contribute to the price discovery process. To further determine the leader of the price discovery process the Gonzalo-Granger measure is used analyse the speed-of-adjustment coefficients of the vector error correction models.

The study analyses the CDS premiums and credit spreads of 41 European corporate entities over the two main sub periods of 15th September 2008 to 28th June 2010 and 29th June 2010 – 9th April 2013 to determine the possible effect the crisis period has had on the dynamics of credit risk pricing. Moreover, the major movements in the CDS and bond spreads as well as their difference the CDS basis are analysed to reveal possible differences between industries. The average CDS basis is found to be negative on most entities during the crisis period, which is a result of the high increase in credit spread values after the collapse of Lehman Brothers in 2008. The post-crisis average CDS basis values, on the other hand, are positive, partly resembling the two markets’ return to their normal states.

The empirical analysis reveals that the long-run equilibrium mainly exists during the crisis period, as the number of equilibrium relationships detected drops to half in the post-crisis period. Moreover, the CDS market leads the price discovery process during both of the sub periods. However, the bond markets’ role in the price discovery process is detected to be larger and more significant in the crisis period than after the crisis as its share in the price discovery process drops from 35 % to 17 % as measured by the Gonzalo-Granger-measure. Thus, it seems that the bond market loses its significance as a market for credit risk trading during more stable market conditions. This is further confirmed by the Granger causality tests which imply that a causality from the CDS market to the bond market is most general among the sample entities during both analysis periods.