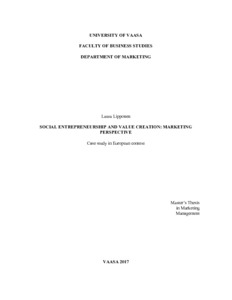 The objective of the thesis was to examine how the means of marketing can support value creation in and contribute to reaching the social objectives in the context of European social entrepreneurship. The phenomenon, recognised to contribute to the objectives of sustainable development and supported by the European Union, has gained more awareness recently with the field growing in Europe. Yet the value that the innovative social ventures produce has largely remained uncharted, partly because of the issues in measuring non-monetary value. The field of marketing in the context has not been the focus of previous research, evoking interest towards the topic especially owing to the field’s ability to solve social issues by satisfying unmet needs. The research gaps discovered in the field might be a consequence of the pre-paradigmatic stage characterising the field and hindering the development of theory.

The theoretical part focused on describing characteristics of social entrepreneurship, the phenomenon in the European context and the relevant theories related to value creation, social value creation and marketing in social entrepreneurship. As the social ventures consist of various business models and earning logics with different emphasis on the creation of financial and social value, theories regarding both non-profit marketing and entrepreneurial marketing were discussed. The empirical part was created based on theme in-depth interviews conducted with 31 social entrepreneurs and 10 political decision makers from eight European countries, and the data was analysed using the approach of qualitative content analysis.

Based on the findings, marketing in social entrepreneurship can be described by the concept of bricolage with combining resources at hand with flexible and sometimes unplanned processes. In addition, the competitive means of marketing were interpreted to have a value adding qualities into the social venture. The hypothesis of the means of marketing being able to enhance the success of the social objectives was as well confirmed in the light of the findings, with marketing having a central role in both co-creating and communicating value to the stakeholders of the social venture.