TOO BIG TO FAIL: STOCK MARKET REACTIONS TO BAILING OUT LARGE FINANCIAL INSTITUTIONS 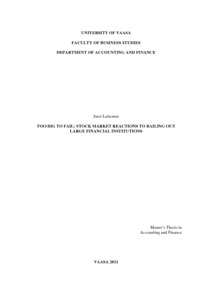 The purpose of this thesis is to investigate the stock market reactions to bailing out large financial institutions during the 2008 subprime crisis. Furthermore, the other purpose is to examine how the market reactions to these measures taken by U.S. government changed during a crisis period that saw several bailouts. Previous research has shown that in several cases the largest financial institutions benefit from these bailouts as investors start to perceive them as too-big-to-fail. Similarly, previous research has suggested that smaller financial firms, those perceived as too-small-to-save, experience negative stock returns after the bailout decisions.

The data consist of 216 U.S. publicly traded financial firms whose total assets were above $1 billion in the end of 2007. Further, the data is divided into four portfolios based on the asset size. The reasoning here is to examine whether the stock returns of largest financial firms differ from those of smaller firms surrounding the bailout decision. In order to investigate this, the event study methodology is applied. The differences between portfolio reactions are analyzed through abnormal returns which are calculated by using the widely used market model. Focus is in the subprime crisis of 2008 meaning that the four bailout events chosen, took all place in that year.

The results are somewhat mixed with providing only some evidence for the hypothesis that the largest financial firms benefit from being too-big-to-fail. When examining, how the market reactions changed as more information about the existing policy line came available, the results show that the market reaction did not change. Thus, results suggest that, at least during the subprime crisis, investors rewarded the largest financial firms only temporarily and did not assume the bailout policy to be a permanent policy line.