International Migration and the Problems Encountered by Migrants as a Result of Movement from West Africa to Finland A Case Study of Migrants from Cameroon . 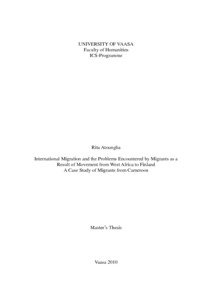 International migration is a phenomenon affecting any kind of human society in this world, there is a vast amount of theory explicating this world wide fact. Young West Africans started migrating to the developed countries like Britain, France, America and Canada. Today the direction of the migrants who are migrating has changed due to the restrictions placed on visa issuance to the developed countries. The migrants have chosen to travel to South Africa, Asia and to Europe. The most important topics discussed among young Cameroonians is travelling abroad. In the late 70s and the 80s many young citizens were able to find work in Cameroon, interact with colleagues, families and also enjoy their culture, but in the 90s when Cameroon was hit by the economic crisis, followed by a reduction of salaries, the only option was migration.

Migration has changed in the past twenty years, which also needs some explanation. This paper focuses on those migrants who have moved to Europe and their problems.

The qualitative method was used for the research and migrants from the selected country will be interviewed using the in-depth interviews to find out how the problems affect their integration into their country of destination. Some respondents have settled in Finland, others are planning to migrate to other countries. The dual labour market theory helps to explain one of the main problems which is unemployment among the migrants. These problems will also prove that their expectations from their countries of origin are not the realities they find in their country of destination. This paper will help potential future migrants to be aware of the problems and be well prepared when they travel abroad or make decisions to migrate.