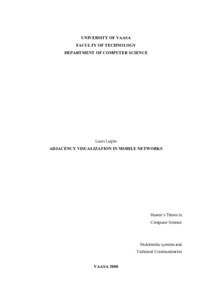 The ever-increasing usage of mobile phones forces the network operators to expand and tune their mobile networks continuously to meet the growing requirements for the quality of service. This is done with the help of optimization tools.

One of the network optimization tools used by operators is Nokia Optimizer, whose adjacency management functionality as well as the process for developing the said functionality is described in this thesis. The development of Optimizer started in 2001, at the time as this study began. Several versions of Optimizer were developed during the course of this study.

The aim of this thesis is to study the possibilities for managing and visualizing handovers in a mobile network in a graphical user interface. The thesis also covers software architecture and performance related issues as part of the software implementation process.

The most important research problem was adjacency visualization on top of a geographical map. More specifically, the aim was to study what kind of icons and color usage were best suited for representing adjacencies and related information on the map, at the same time keeping in mind that the solution would have to work also in cases where a sizeable amount of objects as well as other information was to be shown. During the course of this study it came apparent that performance issues related to adjacency management had to be addressed as well.

As a result of this study, useful solutions for adjacency visualization were found for Optimizer. Significant improvements in adjacency management and in performance were achieved as well, as a comparison of Optimizer and earlier Nokia optimization tools demonstrates.