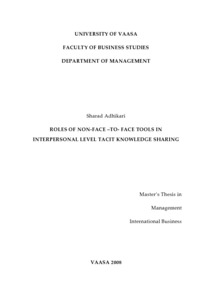 Interpersonal interactions among employees during the course of ongoing organisational routines- such as meetings, e-mails, telephone calls, projects, and informal encounters- is the primary mechanism through which knowledge is shared.
Due to the dispersed operations, non-face-to-face tools have been quite appropriate to share general ideas, personal beliefs without necessarily meeting person face-to-face.

The purpose of this thesis is to explore whether non-face-to-face tools like emails and telephone impact development of social capital that facilitate interpersonal level tacit knowledge sharing. This study, thus, aimed to explore whether such tools facilitate or
inhibit the development of different social capital which are assumed to assure effectiveness of interpersonal tacit knowledge sharing. Since, such sharing of ideas and personal beliefs would be affected with lots of factors; the study is delimited to explore different dimensions of social capital theory. But some mediating or contextual factors like face-to-face meetings, time and distances are taken into consideration while
building up the theoretical framework of the study.

This study uses single in-depth case study. Further, the findings are based on 10 semistructured interviews which provided the empirical basis for the case study.

It was found that such non-face-to-face tools do support different social capital factors. Though, it might not assist building up social capital from scratch but it proved to
support the existing ties providing opportunity to interact with people despite of time and spatial distance. On the contrary, such tools had minimal effect on the development of shared cognitive grounds as well as trust unless people have met faceto-
face or have known each other in due course of time.