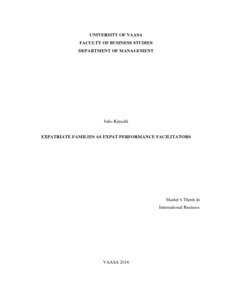 Aim of the Study: Recognizing the continuously growing need for corporate foreign workers, the different types of expatriates today as well as the partnerships & family structures of contemporary expatriates, this paper aims to find out the ways in which expatriate partners and other family members facilitate expatriates’ performance in work and non-work domains. The facilitation is seen as a product of different partner-based support systems, the influence of which spills over to the work-domain. Based on the expatriate’s point of view, this study explores how the expatriates themselves perceive this positive influence.

Methodology: The support systems and spillover & crossover effects are studied through semi-structured interviews where the subject is a current or former expatriate who, while abroad, was in a relationship and/or had young children. The different forms of support are analyzed thematically. Moreover, the perceived spillover & crossover are discussed.

Findings: Five support themes were identified: bureaucratic assistance, language mentoring, cultural guidance, networking assistance and cross-cultural competence & mobility of the partner. Through these forms of support, expatriates can save time and nerves in the non-work domain, allowing them to shift more focus on performing at work. The strongest forms of support were given by the host country national partners who are completely adjusted in the host country.

Limitations: The volunteer response sample and the dominance of one host country question the reliability of the findings, requiring more research in other countries. Moreover, the cross-sectional approach of the study disregard the change of perceptions throughout the expatriate’s time abroad.

Value of the Study: This thesis is an important addition to the expatriate’s work-life dynamics discussion. It creates understanding and narratives behind the established models which have tried to explain the connection between partner support and expatriate performance.