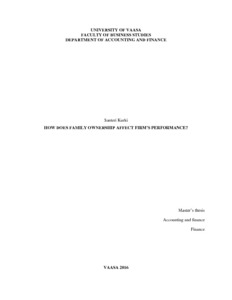 The purpose of this study is to examine does family ownership affect firm's performance. The topic is highly relevant and interests not only private investors but governments and politicians as well. A large portion of the companies around the world is controlled by families. Especially a major share of the small and medium size companies is held by families. Even in the largest companies, families have a large representation.

Previous literature has recently shown more interest towards the topic. The common view is that family firms outperform or have an equal firm performance than other firms. The theory behind this, called agency theory supports this view. According to agency theory, a separation of ownership and management arise a conflict of interests. As owners try to deal with this conflict they are forced to pay costs that are named agency costs. However, while concentrated ownership can reduce agency costs, it can cause other types of problems.

I use a sample of 500 biggest companies in Finland to test if family firms’ performance differs from other companies. In addition to ROA, I use a performance measure created by Talouselämä magazine (TE-grade) that takes into account profitability, solvency and liquidity and creates a weighted average from these, where profitability is weighted by 2. Time period for my empirical part is 2006-2014. Furthermore, I separate state-owned firms and firms that have a large foreign ownership into their separate groups to test how family owned firms compare to them.

The results show that family firms outperform against the whole sample, especially when the performance is measured with TE-grade. With ROA, the positive correlation is not that clear. Firms with foreign ownership have noticeably higher ROA than all of the other comparison groups and a TE-grade similar to family firms.