What Makes a Successful Crowdfunding Campaign? A Case Study of Success Factors in Reward-Based Crowdfunding of Technology-Based Campaigns 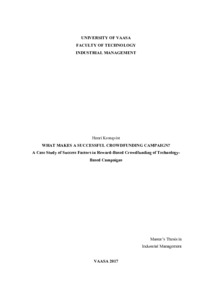 The primary data for this qualitative case study were collected from three reward-based crowdfunding campaign founders in technology-based projects by using semi-structured interviews. Secondary data were gathered through direct observation from the case campaign websites. An inductive approach was used for this research. Thus, the analysis and theory building came during and after the data gathering. The research data were categorized and analyzed within and across the cases, and finally compared with existing research and theories.

The research results indicated that there are at least seven factors influencing crowdfunding success, including product, pre-campaign community, team, presentation, awareness, preparation, and authenticity. Additionally, several explanations were provided to help understand why these factors were considered important. The main implications of this research concern product attributes and pre-campaign communities. The campaign founders considered products and various product attributes as one of the most important factors in crowdfunding success, suggesting further research of their dynamics in different campaign categories in reward-based crowdfunding. In addition, crowdfunding campaigns were found to benefit from pre-campaign communities by allowing crowds to be committed and involved in projects even before they enter a crowdfunding stage, thus increasing attention and the amount of potential funders. Finally, this research argues that more research is required to better understand the crowdfunding phenomenon by gathering data from new and diverse sources.