The long-term performance of acquiring companies in Finland 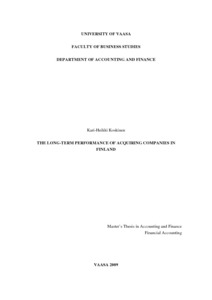 This research paper concentrates on evaluating the long-term post-merger performance of Finnish mergers and acquisitions completed during 1995–2006. As the overall wealth effects related to acquisitions are enormous, their performance and success has been immensely studied both by researchers and corporate managers. This research though has mainly concentrated on observing the announcement period returns while the long-term studies have been scarce. The purpose of this study is to test how and if the pre-merger valuation of the acquirer influences the eventual three-year post-merger performance.

Using an event study method, the aim is to find out if high-valuation “glamour” firms are the primary cause of the long-term performance. The effects of the chosen payment method and acquirer size are also studied in order to offer a more comprehensive view of the factors affecting the mergers and acquisitions. Attention is also given for recent findings of the short comings of long-term event-studies and especially the problems which might present themselves. These findings imply that measuring problems associated to the use of the conventional t-test for long-term event-studies might have been a source of the negative underperformance of some of the earlier studies.

The results clearly show that Finnish acquirers which undertake mergers and acquisitions perform poorly afterwards, but a majority of the poor performance can be accounted for high-valuation “glamour” acquirers. Low-valuation “value” firms also underperform but no statistical significance is found. The evidence also suggests that the chosen method of payment affects the long-term performance as acquisitions financed using equity only fared considerably worse than those financed with cash only. The acquirer size had also effect on the eventual performance of the merger. All size groups underperformed but statistical significance was only found for medium and small acquirers.