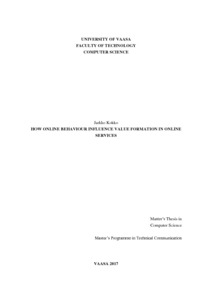 Social interaction has grown to be an important part of the information systems. The so-called social component is present in many programs, let alone in videogames, where the social aspect has grown rapidly. Many game developers integrate different social interaction tools in online video games. These tools can be variable, most often being ways to discuss with others while playing the game. Social interaction can often be associated to a membership of certain social community. This can be anything from being composed of the whole player base of certain video game, to being just a small group of friends playing games.

Research results suggests social interaction is important regarding to value formation. Research data states that each research participant have spent more time with the game because of positive social experiences, while only one reported having stopped playing certain game because of negative social experience. Besides this one case, research data
suggest negative social interaction is never the sole reason to stop playing the game. Usually there are other reasons influencing this as well.