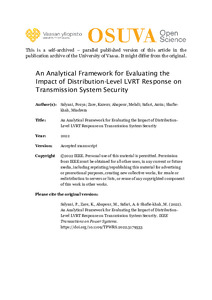 vertaisarvioitu
©2022 IEEE. Personal use of this material is permitted. Permission from IEEE must be obtained for all other uses, in any current or future media, including reprinting/republishing this material for advertising or promotional purposes, creating new collective works, for resale or redistribution to servers or lists, or reuse of any copyrighted component of this work in other works.

Low voltage ride through (LVRT) is a solution to increase the tolerance of distributed energy resources (DERs) against the voltage sags. However, the possibility of DERs trip according to the present grid codes exists. Such trips are essential for transmission systems with connected DER-penetrated distribution networks (DPDNs). This paper investigates an analytical framework to see the impact of distribution-level LVRT response on transmission system security. LVRT response stands for the total amount of lost DER capacity due to the inability to meet the LVRT requirement during the voltage sag. This generation loss in the distribution sector can expose the transmission network to lines overloading after fault clearance. The proposed novel approach is based on a source contingency analysis that lets TSOs conduct an LVRT-oriented security assessment. A mathematical function is defined as the LVRT response function of DPDNs. This function gives the lost DER capacity in response to the transmission level transient faults and is constructed by distribution system operators (DSOs). The TSO can use these functions to assess the loading security of transmission lines in post-clearance conditions. In this analytical framework, LVRT-oriented security is evaluated by calculating the risk of lines overloading under a large number of random faults.The proposed approach is implemented in two test power systems with a considerable DER penetration level to obtain the risk of line overloading due to the LVRT response in distribution networks.