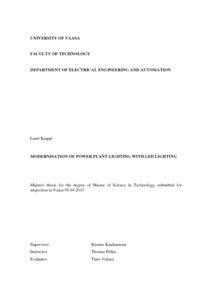 The objective of this thesis is to study the possibility of installing light emitting diode (LED) lighting in a Wärtsilä power plant. Additionally, the objective is to list the rel e-vant international lighting standards. The LED lighting technology appears to have desirable properties, which is why LED lamps were chosen to be compared in this study. Real life examples of power plant rooms were chosen as a base for simulations. Original lighting simulatio ns were com-pared against a new set of simulations with LED technology lighting. Quality of light-ing, energy use and costs of installation and maintenance interval were compared.

In three different simulations of engine hall, LED lamps did not appear to be the prefer-able choice for lighting. Compared to linear fluorescent lamps, LED lamps either co n-sumed more electrical energy, required more luminaires to be installed or lowered the lighting quality of the engine hall, depending on the chosen LED lamp types.

In conclusion, LED lighting was found not being suitable for this application. The lamps based on LED lighting technology seem to be unable to compete against the older lighting technolo gy lamps such as linear fluorescent t ubes and high intensity discharge lamps in aspects of energy consumption and light distribution in an industrial setting. Tested LED lamps did not produce enough lumens per watt and did not distribute the light well enough when compared to the older solution