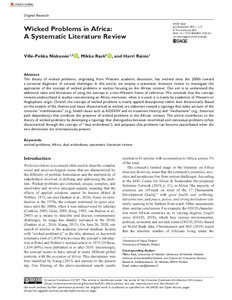 vertaisarvioitu
© The Author(s) 2021. This article is distributed under the terms of the Creative Commons Attribution 4.0 License (https://creativecommons.org/licenses/by/4.0/) which permits any use, reproduction and distribution of the work without further permission provided the original work is attributed as specified on the SAGE and Open Access pages (https://us.sagepub.com/en-us/nam/open-access-at-sage).

The theory of wicked problems, originating from Western academic discussion, has evolved since the 2000s toward a universal diagnostic of societal challenges. In this article, we employ a systematic literature review to investigate the application of the concept of wicked problems in studies focusing on the African context. Our aim is to understand the additional value and limitations of using the concept in a non-Western frame of reference. We conclude that the concept remains underutilized in studies concentrating on Africa; moreover, when it is used, it is mainly by academics of Western or Anglophone origin. Overall, the concept of wicked problems is mainly applied descriptively rather than theoretically. Based on the analysis of the themes and issues characterized as wicked, we elaborate toward a typology that takes account of the concrete “manifestations” (e.g., health issues such as AIDS/HIV and its treatment history) and “mechanisms” (e.g., historical path dependency) that condition the presence of wicked problems in the African context. The article contributes to the theory of wicked problems by developing a typology that distinguishes between interlinked and contextual problems (often characterized through the concept of “dual wickedness”), and proposes that problems can become exacerbated when the two dimensions are simultaneously present.