Training the Vocal Expression of Emotions in Singing : Effects of Including Acoustic Research-Based Elements in the Regular Singing Training of Acting Students 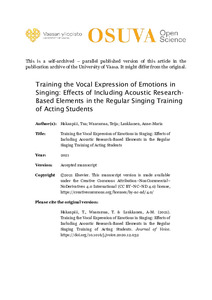 Objectives
This study examines the effects of including acoustic research-based elements of the vocal expression of emotions in the singing lessons of acting students during a seven-week teaching period. This information may be useful in improving the training of interpretation in singing.
Study design
Experimental comparative study.
Methods
Six acting students participated in seven weeks of extra training concerning voice quality in the expression of emotions in singing. Song samples were recorded before and after the training. A control group of six acting students were recorded twice within a seven-week period, during which they participated in ordinary training. All participants sang on the vowel [a:] and on a longer phrase expressing anger, sadness, joy, tenderness, and neutral states. The vowel and phrase samples were evaluated by 34 listeners for the perceived emotion. Additionally, the vowel samples were analyzed for formant frequencies (F1–F4), sound pressure level (SPL), spectral structure (Alpha ratio = SPL 1500–5000 Hz − SPL 50–1500 Hz), harmonic-to-noise ratio (HNR), and perturbation (jitter, shimmer).
Results
The number of correctly perceived expressions improved in the test group's vowel samples, while no significant change was observed in the control group. The overall recognition was higher for the phrases than for the vowel samples. Of the acoustic parameters, F1 and SPL significantly differentiated emotions in both groups, and HNR specifically differentiated emotions in the test group. The Alpha ratio was found to statistically significantly differentiate emotion expression after training.
Conclusions
The expression of emotion in the singing voice improved after seven weeks of voice quality training. The F1, SPL, Alpha ratio, and HNR differentiated emotional expression. The variation in acoustic parameters became wider after training. Similar changes were not observed after seven weeks of ordinary voice training.