European Germany or a German Europe? Discursive articulation of German nation-state identity in the editorials and commentaries of the Frankfurter Allgemeine Zeitung during the first year of the Euro Crisis 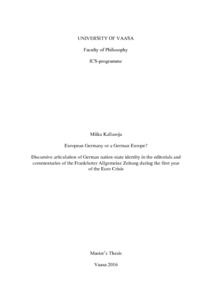 The subject of the study is the discursive articulation of German nation-state identity and Europe in the German newspaper Frankfurter Allgemeine Zeitung during 2010, the first year of the euro crisis. The material consists of editorials and commentaries. As evaluative and argumentative text types they both contribute to and reflect the public discourse on a given topic, and therefore engage in politics, defined in the broad sense as negotiation and struggle over the attribution of meaning within society.

The theoretical background of this study is in post-structuralist discourse theory and its application in a model originally designed for foreign policy analysis. The concept of nation-state identity is used to describe the relationship between Europe and the nation. Although not often contested, nation-state identities are subject to redefinition at times of crisis, defined as critical junctures. The euro crisis is treated as a critical juncture that has the potential to induce discursive change.

The methods for analyzing these discursive articulations are taken from German Diskurslinguistik. The methodological approach includes both quantitative and qualitative analyses of specific keywords. These keywords were partially derived from previous research of nationalist discourse in the media and included words related to the German nation-state, EU and Europe. These words were then categorized into semantic roles, on the basis of which their relationships and positionings could be analyzed.

The study found that the German nation-state identity is articulated in a way that emphasizes its economic power while attempting to justify an orientation based on national interests, Germany’s leadership role and a break from the country’s pro-European past by the fact that the euro’s stability is at stake. While the meaning of what it means to be “European” becomes thus contested in the light of the country’s past, there is also some emphasis on continuity with the past.