Business negotiation tendencies of Finnish and Kosovan negotiators: The role of culture 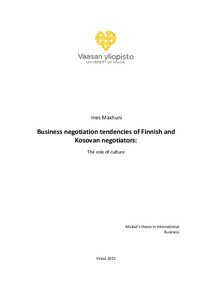 In today’s global economy, international business negotiations play a fundamental and critical role in every aspect of conducting business. International business negotiation does not only involve mastering the issues that are being discussed, but also cultural sensitivity in understanding the characteristics and behaviors of the partners and adapting one’s way of negotiating.

The purpose of this study is to explore the role of culture in the negotiating tendencies of Finnish and Kosovan business negotiators by using Salacuse’ s framework of ten elements and Hofstede's cultural framework.

For future research, to get a wider understanding, larger samples should be collected. Additionally, more literature reviews of Kosovan negotiators’ behavior should be conducted. Finally, the whole negotiation process of both cultures could investigate to get a more in-depth view