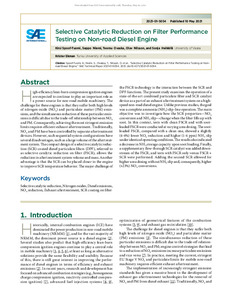 vertaisarvioitu
© 2021 The Authors. Published by SAE International. This Open Access article is published under the terms of the Creative Commons Attribution License (http://creativecommons.org/licenses/by/4.0/), which permits distribution, and reproduction in any medium, provided that the original author(s) and the source are credited.

High-efficiency lean-burn compression ignition engines are expected to continue to play an important role as a power source for non-road mobile machinery. The challenge for these engines is that they suffer both high levels of nitrogen oxide (NOx) and particulate matter (PM) emissions, and the simultaneous reduction of these particular emissions is difficult due to the trade-off relationship between NOx and PM. Consequently, achieving the most stringent emission limits requires efficient exhaust aftertreatment. Traditionally, NOx and PM have been controlled by separate aftertreatment devices. However, such sequential system configurations have several disadvantages, such as a large volume of the aftertreatment system. The compact design of a selective catalytic reduction (SCR)-coated diesel particulate filters (DPF), referred to as selective catalytic reduction on filter (FSCR), allows the reduction in aftertreatment system volume and mass. Another advantage is that the SCR can be placed closer to the engine to improve SCR temperature behavior. The major challenge of the FSCR technology is the interaction between the SCR and DPF functions. The present study examines the operation of a state-of-the-art combined particulate filter and SCR catalyst device as a part of an exhaust aftertreatment system on a high-speed non-road diesel engine. Unlike previous studies, the goal was a complete ammonia (NH3) slip-free operation. The main objective was to investigate how the SCR properties—NOx conversion and NH3 slip—change when the filter fills up with soot. In this context, tests with clean FSCR and with soot-loaded FSCR were conducted at varying urea dosing. The soot-loaded FSCR, compared with a clean one, showed a slightly (4-6%) lower NOx reduction and higher (1-4 ppm) NH3 slip under identical operating conditions. The results also indicated a decrease in NH3 storage capacity upon soot loading. Finally, a supplementary flow-through SCR catalyst was added downstream of the FSCR, and tests with FSCR only versus FSCR + SCR were performed. Adding the second SCR allowed for higher urea dosing without NH3 slip and, consequently, higher (+23%) NOx conversions.