Pyrolysis treatment of nonmetal fraction of waste printed circuit boards : Focusing on the fate of bromine 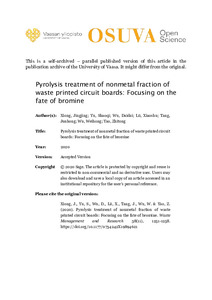 vertaisarvioitu
© 2020 Sage. The article is protected by copyright and reuse is restricted to non-commercial and no derivative uses. Users may also download and save a local copy of an article accessed in an institutional repository for the user's personal reference.

Advanced thermal treatment of electronic waste offers advantages of volume reduction and energy recovery. In this work, the pyrolysis behaviour of nonmetallic fractions of waste printed circuit boards was studied. The fate of a bromine and thermal decomposition pathway of nonmetallic fractions of waste printed circuit boards were further probed. The thermogravimetric analysis showed that the temperatures of maximum mass loss were located at 319°C and 361°C, with mass loss of 29.6% and 50.6%, respectively. The Fourier transform infrared Spectroscopy analysis revealed that the spectra at temperatures of 300°C–400°C were complicated with larger absorbance intensity. The nonmetallic fractions of waste printed circuit boards decomposed drastically and more evolved products were detected in the temperature range of 600°C–1000°C. The gas chromatography–mass spectrometry analysis indicated that various brominated derivates were generated in addition to small molecules, such as CH4, H2O and CO. The release intensity of CH4 and H2O increased with temperature increasing and reached maximum at 600°C–800°C and 400°C–600°C. More bromoethane (C2H5Br) was formed as compared with HBr and methyl bromide (CH3Br). The release intensity of bromopropane (C3H7Br) and bromoacetone (C3H5BrO) were comparable, although smaller than that of bromopropene (C3H5Br). More dibromophenol (C6H4Br2O) was released than that of bromophenol (C6H5BrO) in the thermal treatment. During the thermal process, part of the ether bonds first ruptured forming bisphenol A, propyl alcohol and tetrabromobisphenol A. Then, the tetrabromobisphenol A decomposed into C6H5BrO and HBr, which further reacted with small molecules forming brominated derivates. It implied debromination of raw nonmetallic fractions of waste printed circuit boards or pyrolysis products should be applied for its environmentally sound treating.