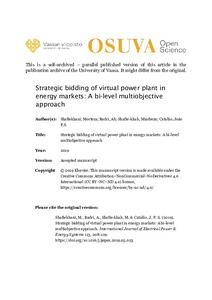 This paper represents a model for finding the strategic bidding equilibrium of a virtual power plant in a joint energy and regulation market in the presence of rivals. A bi-level mathematical program with equilibrium constraints (MPEC) is represented for modeling the behavior of each producer. The upper level deals with profit maximization of each strategic unit and the lower level encompasses social welfare maximization. This is the first objective of the presented model. Power transfer distribution factors (PTDFs) are employed to model transmission constraints. The proposed bi-level problem is converted to a traceable mixed integer linear programming problem using duality theory and Karush-Kahn-Tucker (KKT) optimization conditions. Simultaneous solution of all MPECs forms an equilibrium problem with equilibrium constraints (EPEC). Solving the resulting EPEC using diagonalization algorithm and game theory, a market Nash equilibrium is obtained. Another goal is to solve the bi-level problem in a bi-objective way using the augmented epsilon constraint method, which maximizes the profit and minimizes the emissions of virtual power plant units. The proposed model is tested on a standard IEEE-24 bus system and the results indicate that, at the equilibrium point, the profit of a virtual power plant and GenCo will be less than in the initial state.