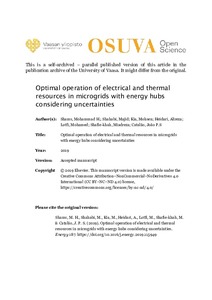 Microgrids are often designed as energy systems that supply electrical and thermal loads with local resources such as combined heat and power units, renewable energy sources, diesel generators, and others. However, increasing interaction between natural gas and electrical systems, in addition to increased penetration of natural gas fired units gives rise to both opportunities and challenges in microgrid operation scheduling. In this paper, the energy hub concept is used to construct a scenario-based model for the optimal scheduling of electrical and thermal resources in a microgrid with integrated electrical and natural gas infrastructures. The objective function of the proposed model minimizes the expected operation costs while considering all network constraints and uncertainties. The natural gas and electricity flow equations are linearized and formulated as a mixed-integer linear programming problem. Scenarios associated with stochastic variables such as renewable generation and electrical and thermal loads are generated using the corresponding probability distribution functions and reduced using a scenario reduction technique. The proposed model is applied to an energy hub-based microgrid and the simulation results demonstrate the effectiveness of the approach. Furthermore, the benefits of implementing electrical and thermal demand response schemes are quantified. Also, more in-depth analyses for this network-constrained model are performed, including natural gas flow rate variations, natural gas pressures, power flow, and nodal voltages.