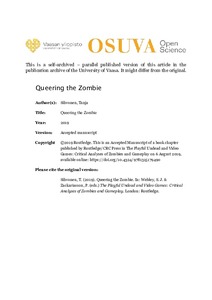 This article starts with the observation that all monsters are created by humans and thus they serve specific cultural and sociopolitical purposes. The study is set to finding out, first, how the traditional figure of the zombie works as a monster in popular culture, and second, how digital games open up new possibilities for it to exist and to act. Even if the zombie has symbolic power that makes it an ideal antagonist in games, assigning individual agency to it is very unlikely. From this follows that playing (as) the zombie in games is actively discouraged. The analysis presented here differs from earlier research on the zombie as a posthuman figure in that it seeks to understand the functions and the usability of the monster specifically as a digital game character through analyzing examples such as Stubbs the zombie in Rebel Without a Pulse (Wideload Games, 2005). In the end, this article is aimed at investigating the zombie as a queer figure that transgresses several boundaries in games, and ultimately offers us the possibility of transcending the human condition.