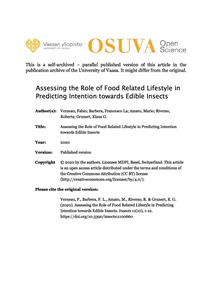 vertaisarvioitu
© 2020 by the authors. Licensee MDPI, Basel, Switzerland. This article is an open access article distributed under the terms and conditions of the Creative Commons Attribution (CC BY) license (http://creativecommons.org/licenses/by/4.0/).

Although recent literature has shown that switching to an insect-based diet could provide several relevant advantages—from a nutritional, environmental, economic and ecological point of view—the potential growth of insects as everyday food is still unclear. Despite a growing literature on consumer acceptance and product preference for insect-based food, a segmentation of this future and possible market has never been proposed. Therefore, in the present paper, a market segmentation based on the Food Related Lifestyle Scale (FRLS), was performed in order to predict consumers’ willingness to eat (WTE) edible insects. Moreover, the role of perceived behavioural control is taken into account. Results shows that the novelty and benefits of insect consumption have generated much interest in edible insects amongst consumers belonging to the Rational cluster, who showed the highest intention to introduce insects in their diet, thus confirming the presence of a niche of “early adopters”. In addition, perceived behavioural control was the major driver of intention. Implications for attempts to encourage people to incorporate insect-based foods into their diet are discussed, with special reference to the role of marketing campaigns.