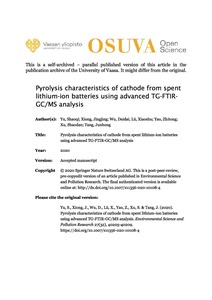 vertaisarvioitu
© 2020 Springer Nature Switzerland AG. This is a post-peer-review, pre-copyedit version of an article published in Environmental Science and Pollution Research. The final authenticated version is available online at: http://dx.doi.org/10.1007/s11356-020-10108-4

Thermal treatment offers an alternative method for the separation of Al foil and cathode materials during spent lithium-ion batteries (LIBs) recycling. In this work, the pyrolysis behavior of cathode from spent LIBs was investigated using advanced thermogravimetric Fourier transformed infrared spectroscopy coupled with gas chromatography-mass spectrometer (TG-FTIR-GC/MS) method. The fate of fluorine present in spent batteries was probed as well. TG analysis showed that the cathode decomposition displayed a three-stage process. The temperatures of maximum mass loss rate were located at 470 °C and 599 °C, respectively. FTIR analysis revealed that the release of CO2 increased as the temperature rose from 195 to 928 °C. However, the evolution of H2O showed a decreasing trend when the temperature increased to above 599 °C. The release of fluoride derivatives also exhibited a decreasing trend, and they were not detected after temperatures increasing to above 470 °C. GC-MS analysis indicated that the release of H2O and CO displayed a similar trend, with larger releasing intensity at the first two stages. The evolution of 1,4-difluorobenzene and 1,3,5-trifluorobenzene also displayed a similar trend—larger releasing intensity at the first two stages. However, the release of CO2 showed a different trend, with the largest release intensity at the third stage, as did the release of 1,2,4-trifluorobenzene, with the release mainly focused at the temperature of 300–400 °C. The release intensities of 1,2,4-trifluorobenzene and 1,3,5-trifluorobenzene were comparable, although smaller than that of 1,4-difluorobenzene. This study will offer practical support for the large-scale recycling of spent LIBs.