Implementing Strategies for the Model Law on Cross-Border Insolvency : The Divergence in Asia-Pacific and Lessons for UNCITRAL 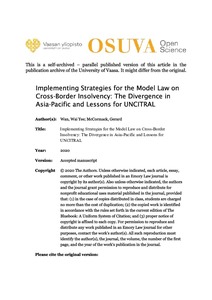 vertaisarvioimaton
© 2020 The Authors. Unless otherwise indicated, each article, essay, comment, or other work published in an Emory Law journal is copyright by its author(s). Also unless otherwise indicated, the authors and the journal grant permission to reproduce and distribute for nonprofit educational uses material published in the journal, provided that: (1) in the case of copies distributed in class, students are charged no more than the cost of duplication; (2) the copied work is identified in accordance with the rules set forth in the current edition of The Bluebook: A Uniform System of Citation; and (3) proper notice of copyright is affixed to each copy. For permission to reproduce and distribute any work published in an Emory Law journal for other purposes, contact the work's author(s). All such reproduction must identify the author(s), the journal, the volume, the number of the first page, and the year of the work's publication in the journal.

The UNCITRAL Model Law on Cross-Border Insolvency (“Model Law”) was conceived with the aim of providing a framework for states to obtain consistency in the recognition of foreign insolvency proceedings and granting relief in aid of the foreign courts. The Model Law has achieved moderate success internationally and four states in the Asia-Pacific, namely Australia, Singapore, Japan, and Korea, have enacted legislation based on the Model Law. Scholars agree on the importance of consistent implementation of the Model Law in managing cross-border insolvency to achieve quick, certain, and predictable outcomes.

However, the Model Law’s aims have not been completely met and existing accounts point to two reasons for why there is a lack of complete harmonization. First, states have not fully implemented the Model Law in their domestic law. Second, states’ judiciaries have not consistently interpreted their legislation enacting the Model Law. This lack of harmony is reflected in the fact that UNCITRAL recently felt the need to promulgate a supplemental Model Law on Recognition and Enforcement of Insolvency-Related Judgments.

In this Article, we examine the divergent implementation strategies of the Model Law in Australia, Singapore, Japan, and Korea, and explain the reasons for the divergence. In the case of Japan and Korea, legal origins have been put forward as a reason for the divergence; as these two jurisdictions are not based on common law, they require greater local modification to assure the Model Law will fit into their legal systems. However, we argue legal origins are insufficient reasons for the lack of uniformity. Instead, we argue that where states, like Australia and Singapore, are shifting from a moderately territorialist approach with cross-border insolvency to the modified universalist approach as envisaged by the Model Law, they are more likely to fully implement the Model Law. Where States start from an exclusively territorialist approach (such as in Japan and Korea), they are likely to recognize foreign insolvency proceedings as a broad signal of their international commitment towards adopting global norms, but would demand changes to allow for some room to depart from all of the consequences of recognition of foreign proceedings, even in situations where there may be no real impediment for the implementation of Model Law. However, in Korea, there are signs that judicial attitudes are changing as the judiciary sees the benefits of the Model Law in cooperation and communication, and there may be a greater chance of implementation.

Our study illustrates the limitations of achieving the objectives of the Model Law. We argue that when determining the strategies for uniform implementation of UNCITRAL, in the context of “soft law,” we should take into account the importance of the signaling effect and path dependency of the countries, which will have implications for other jurisdictions considering the adoption of the Model Law or the supplementary Model Law on insolvency-related judgments.