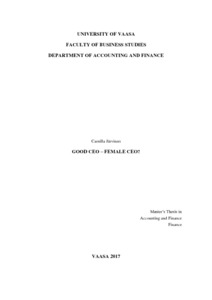 The purpose of this thesis is to study differences between female and male CEOs and to examine whether CEO’s gender has explanatory power over firm performance. The prior research has documented a relationship between top management’s gender diversity and firm performance (for example, Khan and Vieito 2013; Huang and Kisgen 2013; Levi, Li and Zhang 2014; Faccio, Marchica and Mura 2016), however, most of the studies consider firm performance only from one or two perspectives. This study contributes to the previous literature by examining simultaneously firm performance from four different perspectives – profitability, mergers and acquisitions, corporate risk-taking and valuation. The study focuses on S&P 1500 firms during the period of January 2005-December 2015, and applies the difference-in-differences approach as the main empirical methodology.

The empirical evidence of this thesis suggests that firms with a female CEO have higher overall profitability and lower earnings volatility than firms with a male CEO, on average. I measure firm’s overall profitability as return on assets (ROA) and earnings volatility as the volatility of ROA and net income. Interestingly, I document also that female CEOs are not associated with higher operational profitability, measured as EBITD on total assets, even though CEO’s gender is associated with the firm’s overall profitability. This finding suggests that the difference between female and male CEOs’ performance may result from three income statement items in which ROA and EBITD on total assets deviate from each other: interest, taxes and depreciations. Furthermore, I record that firms with a female CEO conduct less acquisitions, generate higher shareholder return in long-term and have lower Tobin’s Q than firms with a male CEO, on average. This evidence, however, is weak and may suffer from endogeneity bias.